Exhilarating & intoxicating - all that glitters in the world of champagne 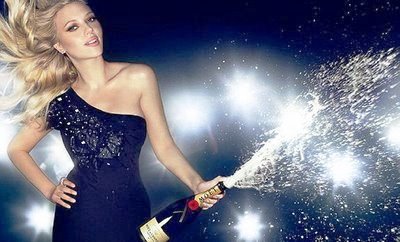 ‘Come quickly – I am drinking stars!’

Legend has it that a Benedictine monk named Dom Perignon, from the Abbey of Hautvillers, just outside the town of Epernay, was the inventor of champagne and, when doing so, exclaimed, ‘Come quickly – I am drinking stars!’

Only sparking wines made from grapes that are grown and picked in a defined area in the cool climate of northern France can legally take on the Champagne appellation.

Champagne can only be made from a maximum of three specific grapes varieties: Chardonnay, Pinot Munier and Pinot Noir. Each champagne house will vary the portion of each to develop their specific blend and house style.

Nothing epitomises the champagne lifestyle more than Hollywood’s ‘golden age’, when aqua vitae (Latin for water of life) was taken literally.  Stretching from the silent films of the 1920s to the all-time classics of the 1940s, it was an unforgettable era—on and off the screen. It was a time when actors and actresses were studio darlings, feeding the public desire for elegance and glamour. A time when the likes of Clark Gable (‘king of Hollywood’), Greta Garbo, Joan Crawford, Fred Astaire, Ginger Rogers, Jean Harlow and Grace Kelly glided around champagne-fuelled parties. A cigarette in one hand and champagne glass in the other, these were the essential props of so many of the films of the era.

Alcohol and films were so ubiquitous that it was only natural that champagne houses used the famous faces of the day to promote their brands. Perhaps the most famous of these was the L’Instant Tattinger poster featuring Grace Kelly, where the framed figure of the actress appears silhouetted behind a champagne glass. Today Moët & Chandon’s advertising campaign features the actress Scarlett Johansson.

Some of the most famous films and one-liners emanated from the era.

Casablanca, which has to be up there with the best of any era, is possibly the greatest advertisement for Mumm’s Cardon Rouge, a bottle regularly seen in the background throughout the picture. Cordon Rouge sat atop of the piano as Sam played As Time Goes By. ‘Kiss me’, says Ilsa to Rick, ‘Kiss me as if it were the last time’, and as they kiss Ilsa knocks over the champagne, a poignant reversal of their halcyon days in Paris (in which another l egendary line was delivered, ‘Here’s looking at you kid’). From an industry perspective, Casablancahas to be up there as the best classic champagne movie of all time.

In An Affair To Remember, pink champagne becomes the talisman of Cary Grant and Deborah Kerr’s tryst. In Gigi, they even sing a song about it. 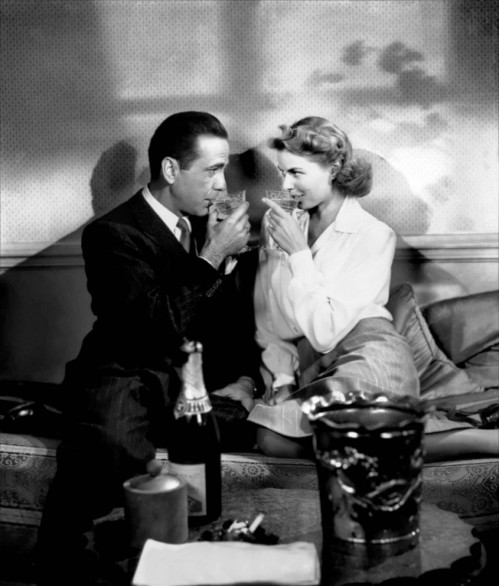 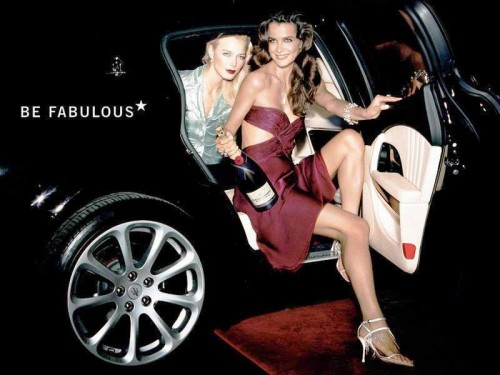 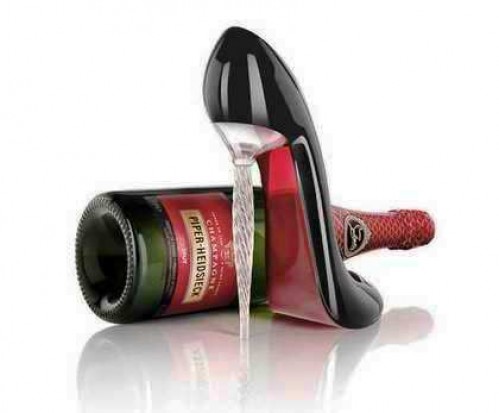 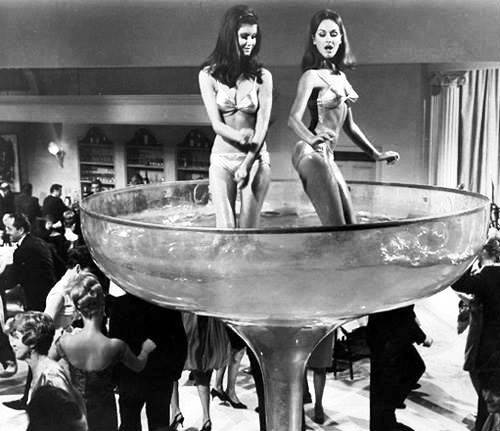 ‘I drink it when I’m happy and when I’m sad. Sometimes I drink it when I’m alone. When I have company I consider it obligatory. I trifle with it if I am not hungry and I drink when I am. Otherwise I never touch it, unless I’m thirsty.’ Madame Jacques Bollinger, London Daily Mail, 17 October 1961

The’ golden age’ of Hollywood sets the scene

‘Champagne’s funny stuff. I’m used to whisky. Whisky is a slap on the back, and champagne’s a heavy mist before my eyes.’ James Stewart as Macaulay Conner in The Philadelphia Story 1940

‘The night they invented champagne it’s plain as it can be they thought of you and me.’ Leslie Caron as Gigi in Gigi 1958

‘I don’t think I’ve ever drunk champagne before breakfast before. With breakfast on several occasions, but never before, before.’ George Peppard as Paul Varjak in Breakfast at Tiffany’s 1961

‘Too much of anything is bad, but too much of champagne is just right.’ F. Scott Fitzgerald

‘My dear girl, there are some things that just aren’t done, such as drinking Dom Perignon ’53 above the temperature of 38 degrees Fahrenheit. That’s just as bad as listening to the Beatles without earmuffs!’ James Bond Goldfinger. 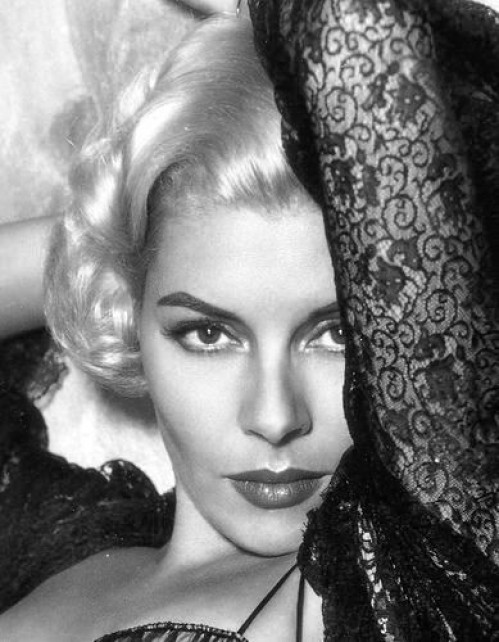 ‘Love is like an empty bottle of champagne: you don’t refill it, you get a new bottle.’ Rossana Rory as Anna in Come September 1961

‘Champagne makes you feel like it’s Sunday and better days are just around the corner.’ Marlene Dietrich 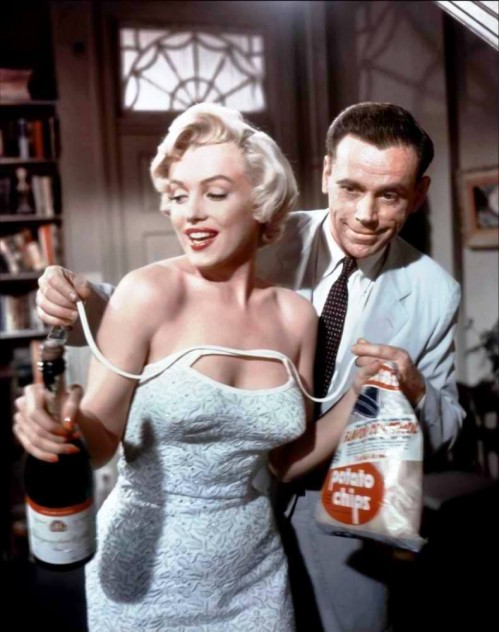 ‘Hey, did you ever try dunking a potato chip in a champagne. It’s really crazy!’ Marilyn Monroe as The Girl in The Seven Year Itch 1955 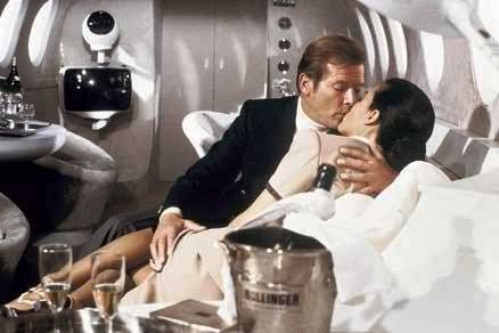 ‘My dear girl, there are some things that just aren’t done, such as drinking Dom Perignon ’53 above the temperature of 38 degrees Fahrenheit. That’s just as bad as listening to the Beatles without earmuffs!’ James Bond Goldfinger.

‘Love is like an empty bottle of champagne: you don’t refill it, you get a new bottle.’ Rossana Rory as Anna in Come September 1961